Social Media: What seat are you taking in the social spinning class? 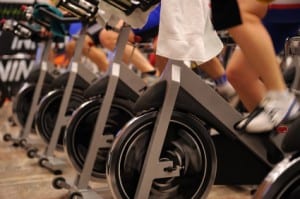 As I got my morning spin groove on I noticed a big difference in the performance of my fellow early morning bikers.

Which biker are you in business, in social media and life?

*They were equivelant to the real social media experts who don't have to tell they world they are such, they just are. These bikers didn't call themselves gurus or avid cyclist. They simply did what they did and it brings them joy and benefit.  In business they would probably be the folks who know how to put a comprehensive social media and marketing strategy together. They would ask top dollar as they know their skills are worth such. They would bring in partners and deliver with confidence, on time and on budget.

*They were equivalent to a social media or marketing newbie eager to learn. Humble and not willing to bite off more than they can chew. These people are often mentored by the best. People will take them under their wing to help them due to their authenticity, genuine eagerness to help and be real even in their weaknesses. These people have potential to be superstars in whatever they do in business and life.

*They were equivelant to a self made social media guru who in reality is clueless. In business these folks don't join the community. They don't partner with competitors for the good of their customers as to them that would be a sign of weakness. They don't share themselves as then they wouldn't look so good. They don't engage. They think they are secure yet appear very insecure on the outside. If only they would admit they too need to learn and join the community they would reap far more benefit than sitting lonely on their bike for a solo ride.

Don't go it alone folks. Don't be afraid to ask for help.  Being a solo entrepreneur or single social media one man or one girl show  in a big or small company can be lonely.  Admit you need help if you need it.

Join the community. Engage! If you are a leader, the lead. Inspire others to do better.  Help the smart newbies and event the clueless newbies. We all have to start somewhere and just because we now know the social media ropes doesn't mean it's right to make fun of or push down people who don't!