Today I launched a new video titled, Social Media – Don’t Get Left Behind.  As you can guess it’s a quick story on why the social media train has left the station and you simply can’t afford to ignore it any longer.  Get on the bus or be left behind.  Pretty straight forward.

Only a few hours later, I am late night multi-tasking.  A little Tweeting combined with an email communication to our community and of course some updates to our websites.

My co-founder spent the last two days networking and came home with tons of leads. We had big plans to finalize a couple squeeze pages this evening and send out the first nurture campaign email first thing tomorrow.

However, thanks to our host provider, BlueHost, this was not possible.  Not sure what is going on because I can’t get ahold of them.

Their lines are ringing busy.  There is no announcement on the front page of their website.

Their customers are obviously tech savvy.  I would guess a majority of them are tweeters.  BlueHost is one of the recommended host providers for WordPress websites.

So I did what I always do when I am at a loss for information.  I go to Twitter.  It has the best real-time search for most anything these days.

Within seconds I see many who are experiencing the same issues.  Their sites are down too.  Even though it stinks on one hand it’s a relief as I know it’s not just me or something I did to break my own server.

At first we’re all hopeful we can tweet Bluehost and that maybe they’ll respond.

Wrong! They only have 418 followers and are only following 2 people.  The worst part is they haven’t tweeted since February 24th

This is a perfect case study in why businesses can not ignore social media any longer.  Your customers want to communicate with you. They want to tweet with you in 140 characters.  When your phones are down send one simple tweet and you can save 100 loyal customers within minutes.  Wouldn’t one tweet of 140 characters be worth 100 lost customers and the negative brand equity of yet another night time outage? 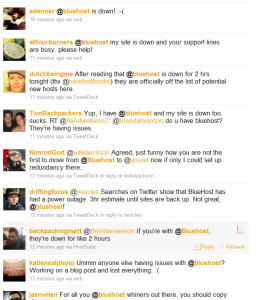 Instead their loyal customers are trading tweets discussing recommendations of what host provider they should switch to.

After midnight they finally realized their Twitter stream had gone mad.  They then jumped on Twitter trying to calm the storm.  A little late to build a relationship, heh?

How much better would it have been to communicate and be my Twitter friend first?  Not a good way to start off a social media relationship telling me not to call your customer service folks.  What else are we suppose to do? The website didn't have an update and the phones were ringing busy.

This gets a five star in #failwhale in my book.

Only bonus is I now have a real-time case study to add to my email communication on being left behind. Only question is when will I be able to post it to my site?  I guess if you’re reading this they must have eventually fixed whatever problem they’re having.

What BlueHost Could Have Done: 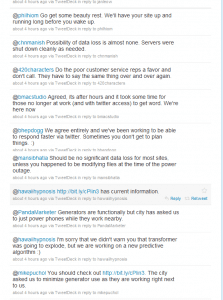 What are your thoughts? Are you finding you want to communicate with your partners, clients and friends in 140 characters? Are they available on the other end?

See this article syndicated on The Customer Collective