Twas the Night Before Christmas with St. Twit 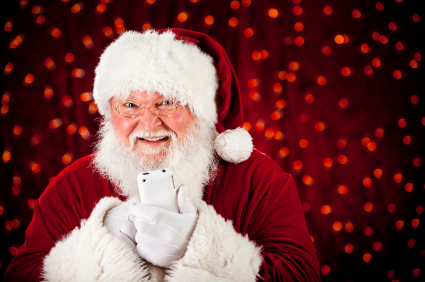 Twas the night before Christmas, when all through Tweetville

Not a tweeter was tweeting, not even the high Klouts.

The iphones were hidden by Santa’s little elves,

In hopes that the Tweeters would do something else.

The children were nestled all snug in their beds,

While visions of daddy without social media danced in their heads.

And mamma is on Facebook and I on the iPad

Had just signed on for one last visit to Santa’s Norad.

When out on the lawn there arose such a clatter,

I sprang from the iPad to see what was the matter.

Away to the window I signed off About.me in a flash,

Threw down my iPad & out flew my secret TweetAdder cash.

The old websites on the breast of the new SMO

Gave the lustre of search results to all Androids below.

When, what to my wondering tweet eyes should appear,

But a miniature sleigh, and eight giant tweet-deer

With a little old driver, so Googley and quick,

I knew in a check-in it must be St Twit.

More rapid than Foursquare his tweet-deer they came,

And he tweeted, and Amplified, and called them by name!

On, Plaxo! On, Orkut!, on HootSuite and BizNik!

As good mommies and daddies before the disliked wild “social media gurus” fly,

When they meet with an obstacle, now tweet to the sky.

So up to the house-top the tweet-deer they flew,

With the sleigh full of blue whales, and St Twit too.

And then, faster than a mean troll, I heard on the roof

The tweeting & buzzing of each little bird foot.

As I counted in my head, the number of retweets to be found,

Down the chimney St Twit came with a bound.

He was dressed all in blue, from his head to his foot,

And his clothes were all marked up with likes and dislikes.

A bundle of tools he had flung on his back,

His eyes-how they tweeted! his dimples how Delicious!

He reminded us about automation and having a life,

And the importance of not letting life tweet you by.

The user manual for Infusionsoft he held tight in his teeth,

He had a happy MySpace and a little round belly,

That shook when he tweeted, like ActiveRain on Monday!

He was chubby and tweetful, a highly commented old elf,

And I clicked like when I saw him, in spite of myself!

A tweet of his eye and a FruitZoom of his head,

Soon gave me to know I had nothing to dread.

He spoke not a word, but went straight to his WordPress,

And grabbed all the electronics, then turned with a Tumblr.

And laying his tweet finger aside of his iphone,

And giving a Yahoo!, up the chimney he rose!

He sprang to his sleigh, to his team gave a twistle,

And away they all tweeted like the down of a thistle.

But I heard him exclaim, ‘ere he twitted out of sight,

“Happy Christmas to all, and to all a tweet free night!!”

This post was written by a Tweetin', social media nut and addict. I go by the name of @PamMktgNut and am the founder and CEO of FruitZoom, Inc. a social media, brand and marketing agency.  Santa plans to steal my iPhone so I can spend Christmas Eve and Christmas day tweet and social media free.

Do you have the guts to let Santa do the same? Give him the iPhone and let the tweets fly away!