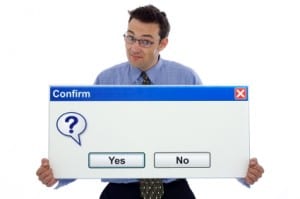 We all know the type. The business, the newspaper, the consultant, the franchise owner, the MLM team lead, the cheesey online city portal who refuses to admit social media success requires engagement. They're afraid of getting negative comments on a blog so they don't blog. They think their current ways are working even though their offline monthly distribution is 50k and they have less web traffic and email subscribers than I do as an entrepreneur who just left corporate less than 18 months ago!

They are usually also the folks who blast “Like us on Facebook” on every piece of collateral, email newsletter and printed piece of communication.

The fact that you need to engage with real people in social media to see a return on your investment is not just opinion. It's fact. As Brian Solis states, the social currency of online marketing is engagement. I don't think there is a better statement to explain the core of what social media is and what is required.

We all have been doing social media for a long time… it's called talking. It requires a conversation. Social media is simply the medium which enables you to more easily have a conversation with people who you'd probably never meet otherwise. The power of social relationships is mind boggling for those who take the time to engage.

Question: If your audience is not taking action on your behalf, then what's it all for anyway? How do you plan to obtain a positive ROI?

Try This Experiment: If you don't care about more than the “like” you might as well grab a piece of paper, get in the car and head to the nearest networking event. Take your paper and a nice pen into the event and ask people you don't know to sign it. On the paper draw a box next to the signature and ask them to check it.

Now tell me this… will they remember you after the party? Okay, they might remember you because what you did was a bit wacky. However, let's ignore that fact for now. What did they learn about your business? Do they know why they checked the “like” box on the paper? Did they do it because they were curious what would happen? Did they do it because their friends were doing it? Were they reluctant? Did some of them want to remove their signature or check box at some point?

The offline experiment is no different than what happens on Facebook, LinkedIn or Twitter. People are bombarded with friend requests, Facebook business page invitations and even “Farm with me on waste my time all day ville.”

The truth is unless you inspire your audience to action they are not going to remember you. When a person takes action their chances of them remembering you, taking the next step toward a relationship with you and telling a friend about you or your brand is increased exponentially.

I provided many tips for how to engage an audience “after the like” in an earlier article, “What happens after the Facebook Like” People need to open their eyes and look beyond the number of followers, fans, likes and size of LinkedIn network. Anyone who knows me knows I am a data and ROI junkie. I am not stating that numbers don't matter. Numbers do matter. Who doesn't want the largest possible tribe shouting how wonderful your brand is and how much you helped them from a mountain top? I know I'd rather have 500 people doing such than one. However, only focusing on the numbers is not a recipe for success. There must be a balance. You want followers and fans who “like” you because of who you are, how you can help and inspire them, not just because you have a high Klout score.

I am going to use the above suggested paper, pen and “like” exercise at several upcoming social media keynotes and training seminars we are teaching. I can't wait to see what a room full of professional people do when I pass around the piece of paper before the session starts. My guess is they'll all sign it. I bet they'll even check the box that they like it. I'm also pretty confident that they won't have a clue what they are checking, signing and agreeing that they “like”.

One last question: Do the people in your own social community who clicked like or follow even know your face or name? If they don't, might be time to think beyond the “like,” heh?