How to Determine if a Facebook Business Page has Fake Fans 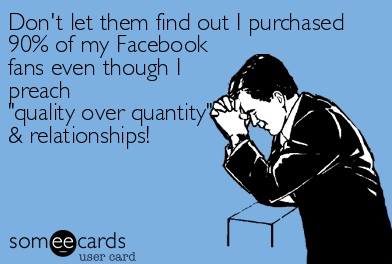 Many of us have recently thought social media and business leaders were finally starting to “get” the importance of real relationships with human beings. However, unfortunately there seems to be a new wave of cheaters, influence score addicted self proclaimed “gurus” that are willing to risk their reputation, integrity, ethics, trust, clients and relationships for a few hundred or tens of thousands fake Facebook fans.

The worst part is these are the same people who are tweeting and preaching the importance of authenticity, relationships, and how to build and be a human social brand.

A few of them are even trusted by some of the world's most respected brands. It is the definition of failure and a sign of true insecurity in my humble opinion. More of my thoughts on this topic will come in a separate post as this one is specifically written to help you identify if a Facebook page is loaded with real fans or is being gamed by an influence, short fix craving cheater.

It's pretty easy to check if a Twitter account has fake follwers. You can go to Status People Fake Follower checker and get instant statistics on any Twitter account, including yours. Below is a quick screen capture of the results from Status People for a Twitter account. The account is that of a CEO for popular Twitter measurement tool. On the company website they tout the success of their CEO in building community and that he/she has over 100k Twitter followers. Well, according to Status People, they are fake as fake can get. This lost instant credibility for me and is likely not a tool I will recommend nor take into the accounts and business of our clients. Quite unfortunate.

Note: If you have a large Twitter following, Status people only analyzes a portion of them. The statistics are not perfect.

So how do you determine if a Facebook page has fake fans? While not quite as simple, you can still put multiple data elements together to make a pretty good judgement call on the authenticity of their proclaimed community.

In late 2012, Facebook started to crack down on Fake fans and accounts. Many business pages lost a good portion of their fans if in fact they were fake. Facebook claimed that 8.7% of accounts were at that time fake or undesirable.

Too good to be true? Yes, it sure is!

Have you ever looked at a Facebook page of someone who recently launched a blog or business? You check out their Facebook page and find that they have tens of thousands of fans in just a short time.

At first you may think to yourself, wow, this person must really know how to rock social media and build community.

However, as you dig deeper and do the double click you see that the engagement is nonexistent, even if they have thousands of fans. You click on some of the “likes” they have received on recent posts and it's obvious they are from a country foreign to them. It's also obvious the likes are from fake accounts.

The social trust factor you had when first clicking on their page is pretty much out the door. You do the double click around their page, blog stats and realize they are bogus, cheaters, and buying their fans, period.

The chance that you are going to trust them to help your business is now becoming slim to none. If they're willing to cheat at something as simple as a Facebook fan, what else will they game for themselves or a buck to make from you and your business?

Building a community takes time and investment. Purchasing fake fans is cheating, unethical and wrong. Oh and by the way, it's also in direct violation with Facebook terms and conditions.

The best and only way to see real success in social business and life is by investing in people. By this I am referring to real people, real relationships with human beings, not robots!  I am not referring to fake accounts, fake followers or gamed strategies. 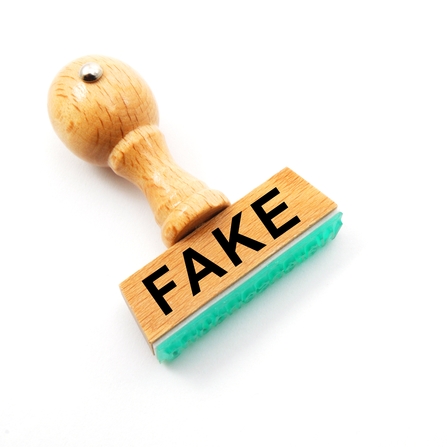 A lie has speed, but truth has endurance. ~Edgar J. Mohn

3 Ways to Identify if a Facebook Page has Fake Fans

1. Verify source city / location and age of their fans.  With this step you are checking if it is possible their Facebook likes are coming from a foreign country for which they have purchased fans. This can be done via paid services through agencies who offer such.

b. Assess the results.

Next you will then see a page which highlights the following information:

What is the most popular age of the fans? Are they 18-24 yr olds? Are they 35-44 years of age or older? Or a different age category? Does the age match their target demographic? Does it make sense this age group would be so engaged with their content and services? 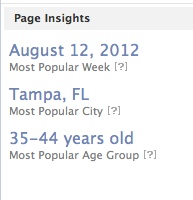 Below I posted a couple examples from Facebook pages. The first is from my own personal business page. The second is from a page that could potentially  have fake likes. Note that my page with only 25% of the fans of the other page has more people talking about it. A proof point that it is not about having a large number of fans if they are fake or not engaging with you and your content.

This one is super easy to check. Just do a quick scan of the content they are posting. How many likes are they getting? Is there an equal distribution of likes? Or are there tons of likes on one day and zero engagement on other posts. Yes, it could be the posts were more engaging or they just rocked Facebook edge rank that day. However, you should be able to see any trends as you scroll the page.

Click on the number of likes link under any post that seems to have a substantial number of likes. It will then take you to a page where you can see the profiles of the likes. Click on a few of them. Are they real accounts? Or are they fake? Do they appear to be from a same foreign country for which their most popular city is in the Facebook insights? If yes, you have another red flag and they may be paying for those likes.

4. When Did Their Fans Become Fans?

On most pages you can see the monthly activity within the timeline. Did they jump from 1,000 fans to 20,000 fans in one month? If yes, they may have had a very successful campaign, became an overnight success online and offline. This is all possible. However, if the data analysis above shows red flags and they show an unrealistic jump in the first few months of launching a page or in any given single month, the chances they are fakers just increased.

The Whole is Greater Than The Pieces

You can't really assess if an account has fake fans from only one data element. It's important to give people and brands the benefit of the doubt. Look at several data elements. If all four of the above data elements don't look right you may have a faker on your hands. It's up to you what you want to do from this point and if you trust them with your customers, data and business success.

Remember relationships happen between real people, between two human beings. Real communities are made up of real people, not robots. Robots do not read, engage, get inspired, laugh, contribute or own a credit card. Building a brand, business or community based upon fake numbers is unethical and in the long run will get you no where.

Invest in real content that helps your audience, employees, customers, partners and greater community solve problems.  Inspire them to do better, be better. Focus on their goals and objectives.  You can never go wrong by investing in people, period. Investment in robots will get you quick gains that are fake. They will not help build your business for the long term.

What are your thoughts when you come across a business page who has fake followers? What happens to the trust you had for the organization? Do you think it shows a sign of integrity, good ethics? Would you trust the business? What if you trusted them and really liked them before finding this out? Will it make you think differently of them?

I'll be writing up a few more posts on this topic to get to the heart of the matter, digging into why people decide to cheat when in reality it's buying them nothing but robots.

Please comment below and let's help make a difference in the social ecosystem. Let's encourage people to come clean on this behavior, to stop faking it and trying to fake us out. We should ask, expect and demand more. It is a silent elephant in the room that needs to be pushed out, period.

Talk Human to Me Series

This blog post is part of a series titled “Talk Human to Me“. It includes a deep look at brand humanization and the power of the human brand.

Subscribe to the series for updates and access to special videos, webinar training, worksheets and more. Would love to hear your input and have you participate in discussions and debates as we challenge each other to be more human from the inside out within our lives and business.