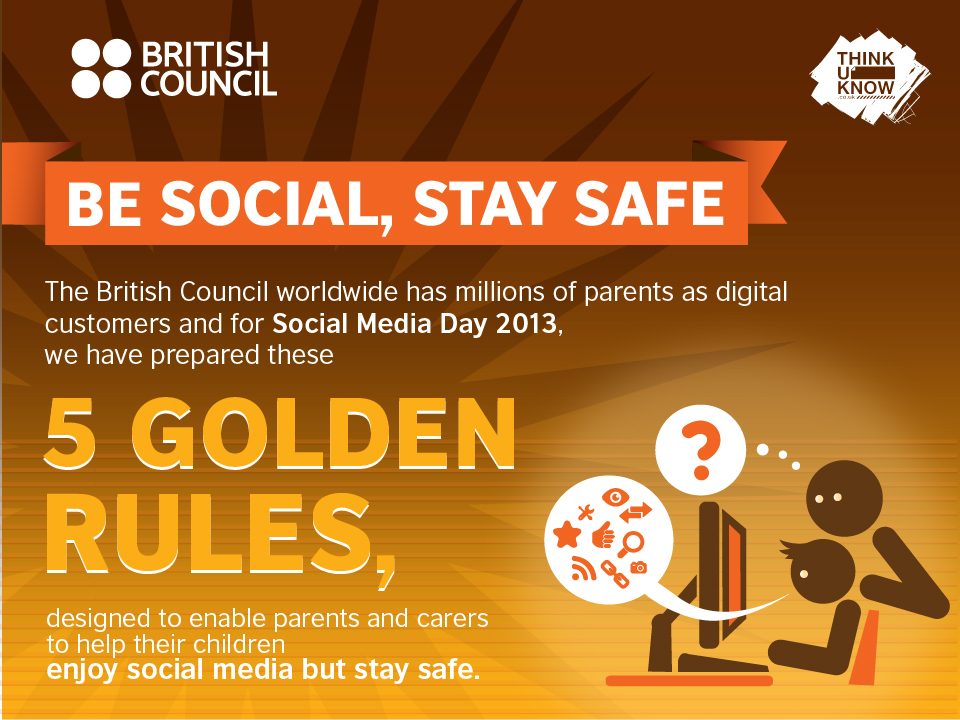 I’m sure I don’t have to tell everyone that yesterday was Social Media Day, an idea started by those lovely folk at Mashable back in 2010, that just gets bigger and bigger every year.

I’m the social media manager at the British Council, a not-for-profit organization that promotes UK education and culture throughout the world. My team (Suzanne and YC) and I decided that we wanted to join in the fun this year and give something to our large, global audience – parents and carers of children.

We’ve recently been getting the same comment, from parents of children learning English with us, wherever they are in the world. They’re worried for the safety of their kids using social media.

Parents want their children to get the benefits of what the online world has to offer but are often freaked out by the scary stuff out there. It's even worse particularly for those parents who are not themselves digital natives. I can completely relate to that too. I don’t know about you, but when my kids (6 and 8 yrs old) hi-jack my iPad, I can’t believe how quick they are able to dominate it. I'm also wary that they’re just a few clicks away from accessing unsavoury and potentially harmful content.

So this is the where the idea for #StaySafe came from. My organization has a global commitment to child safety – our motto is…

“The British Council believes that all children have potential and that every child matters in the world.”

So we decided that on Social Media Day it would be good to link our child protection commitment with social media and offer some sound advice to parents by way of an infographic. We worked with our own Child Protection team and UK online Digital experts CEOP who have a special site for parents called Thinkuknow .

Finally we wanted the infographic to be as inclusive as possible, so we produced a version in English and five other languages as well (Spanish, Simplified Chinese, French, Arabic and Portuguese).

So if you’re a Mom or Dad who want to know the 5 Golden Rules for keeping your children safe on social media, this infographic is for you. If you like it, please help us share and engage in the conversation by using the hashtag, #StaySafe on Twitter and Facebook.

Many thanks to social superstar and super mom Pam Moore and Marketing Nutz for letting me share this with you. Pam, you really rock social!

About the Author: David Blundell