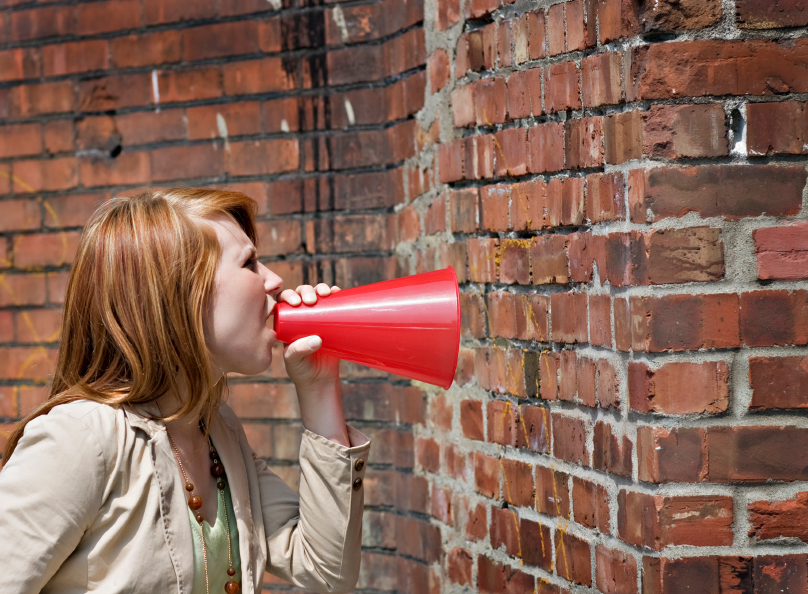 It shouldn't be news to anyone who knows the first thing about social media that becoming part of the conversation is a requirement, not an option. After all, social media is one big fat conversation. There is likely a conversation happening in your honor right now.

Knowing the conversation exists is the first step. Figuring out how you can engage, become part of it and build relationships (and eventually earn business) is the second.

Do you know the conversation exists?

Are you going to acknowledge the conversation?

Are you going to respond and engage in such conversation?

Are you going to appreciate the fact that you have loyal fans and brand evangelists who want to talk with you in public?

If you don't know the answer to these questions… well there is your first problem.

Too many businesses hop online and treat social media as nothing more than a means to talk about themselves. Often times it starts out as “me, me, me” until they quickly realize such approach leaves them not only talking about themselves but also talking TO themselves. 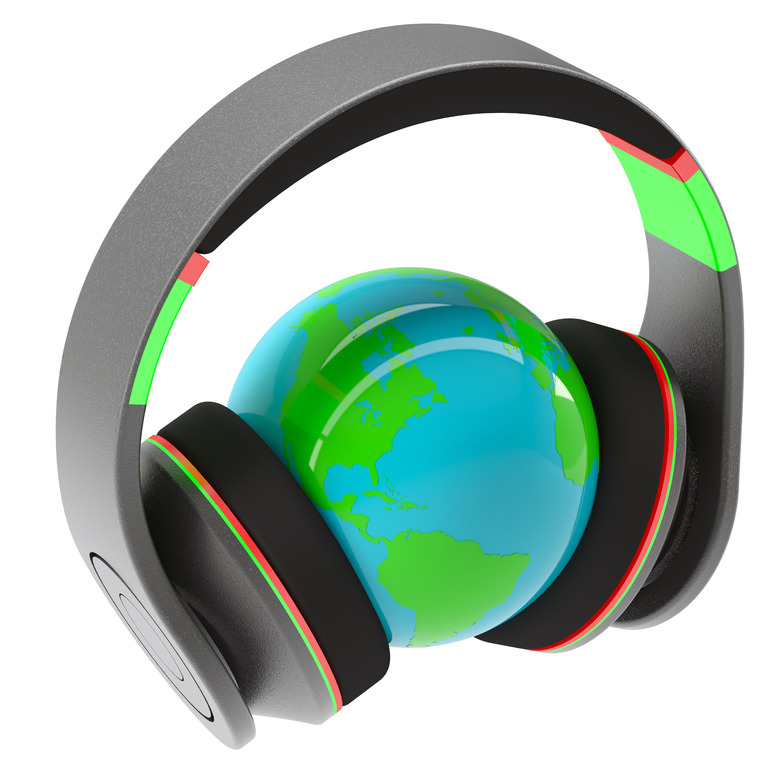 I have a case study for you that happened over the past eight months in Orlando, Fl.

Eight months ago we relocated from Tampa to Orlando, Florida.

As I have been discovering and learning about Orlando, I check into numerous locations, tweet about them and often share my experience along the way. I have been doing such as I am interested to see how many brands are listening and most importantly how many would actually take the time to respond in a real conversation with me.

Heck, I have 170,000+ Twitter followers and love to spread the good news of the awesome things the brands I love are up to. I would think brands would at least acknowledge I exist and that maybe even appreciate the fact I have taken the time to publicly acknowledge them.

I have received a response from several different restaurants including Outback Steakhouse, Chipotle and Chic-Fil-A. We recently conducted training for 26+ marketing leaders of regional Chick-Fil-A franchises in Orlando so we know they are on the right track.

Unfortunately the shopping malls where I spend the most money have failed to respond. This includes outlet malls, large malls, large anchor department stores and the list goes on.

I have received responses from Staples corporate Twitter handle as well as Lowe's employees when asking for assistance about their products and location via Twitter. Note the response from Lowe's was from an employee I had met face to face and not from the actual Lowe's corporate Twitter handle. Lowe's is up to some amazing things when it comes to empowering their internal brand advocates.

I have not received one single response to my tweets, check-ins or online communication of any kind from any one of the malls, shopping centers or mall department stores. That is until today.

Finally, today I received a response from the Florida Mall. It appears they were doing some social listening and actually had someone on the clock to engage in a conversation with their fans.

You can see the screen capture below of the actual conversation that they encourage me to share pics of the items that I purchased. It is unfortunate they did not include a hashtag as it would be the best way to keep a conversation going. I know I sure would have clicked on the hashtag and if there had of been other people tweeting the same, I may have been inspired to tweet a pic of something my family picked up today.

I replied to their tweet, asking about the hashtag. I also let them know I may be using their tweet in a keynote presentation I am delivering this week at the iSummit event in Orlando. As of the time I am hitting publish on this post I have not received a response. I will come back and update this post if and when I do receive an answer to my question about the hashtag. 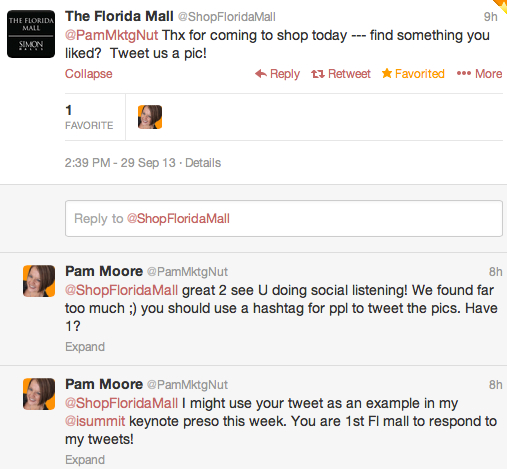 Moral of the story.

If you are not conducting social listening and engaging in a real conversation with your engaged audience and customers, you are truly missing out on the greatest benefit of using social media. Social media is about building relationships.  Sorry folks, but you can't build a relationship with someone you ignore when they are talking to and about you.

As a business leader wanting to leverage social media in a meaningful way, your mission is to figure out where your target audience is hanging out online and figure out how to have the most relevant conversation with them that helps them meet their business and/or life goals and you meet yours.

Don't over complicate it more than it needs to be. Listen more than you talk. Talk to people who talk to you.

Don't let the scenario of the numerous businesses I have attempted to engage with online but they have ignored me, be you. Don't leave your loyal fans and potential customers ignored on the social vine. There is no excuse to ignore your customers, raving fans and brand advocated.

Learn from what the Florida Mall did today. Watch them as they hopefully continue the social listening by acknowledging this blog post, engaging in the conversation and helping others learn right along with them.

Do you often give the social love to brands and find they are not listening? Are you an owner or business leader in a retail or other business that could be missing out on real opportunities to engage with your already loyal fans? Who are your favorite retail brands? What percentage of the time do you receive a response when you mention, check-in on location or attempt to engage with brands? What brands do you think are doing it right? 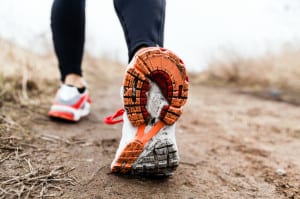 We are going to help you begin to answer these questions and more in this new series, “Get Fit Social Business.”

Subscribe to the series to be notified of upcoming training, podcasts, videos, Google Hangouts, events and more.